There’s no easier way to travel somewhere unfamiliar than having someone lay down a path before you. You can still make the trip your own, but following someone’s footsteps allows you to focus more on the experience, and less on figuring out how to make it a reality.

Luckily, there are people who have taken the time to figure out the intricacies of creating a spectacular trip, and when they share their stories, it makes it that much easier for the rest of us. Deb P., a clinical psychologist from Syracuse, New York, has done just that, and the story she wants to share is rich with valuable travel tips.

While many travel stories are about solos or couples visiting exotic islands, Deb's story is different. Deb took her family on a camping expedition to 11 national parks and monuments throughout the American Southwest — without breaking the bank. While you don’t have to follow her trip to a T (or you can), Deb’s story proves a trip like this is not only possible but it may also be easier than you think.

Here’s how Deb made her family national park trip her own and how you can do it too. 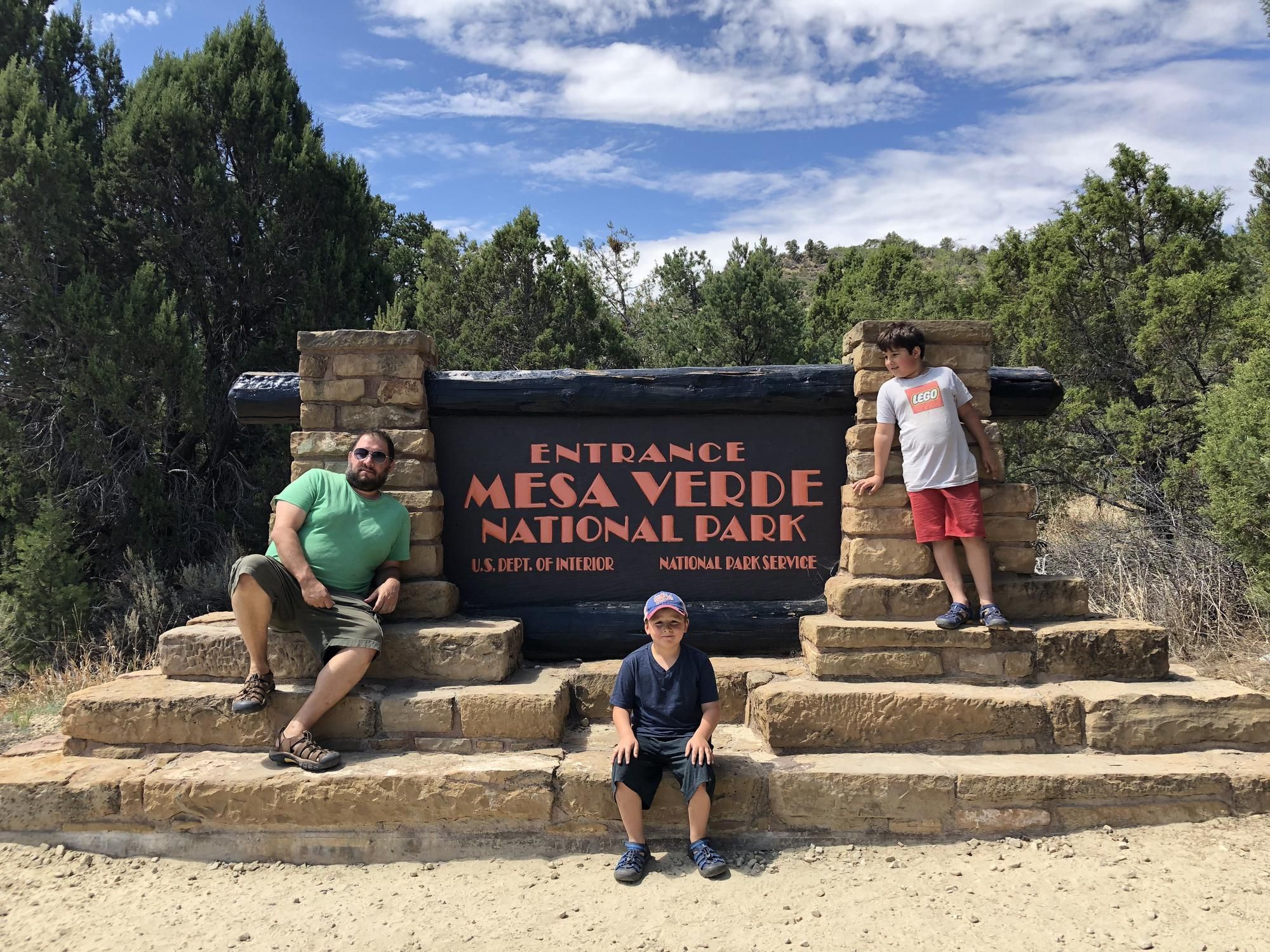 Deb began planning her trip two years in advance. Not because she had to, but because she loves the entire planning process. The trip would have the family flying from Syracuse, New York, to Las Vegas, Nevada, where they’d then rent a car to begin a road trip throughout the American Southwest. As Deb worked through her plan, the National Parks and monuments they would visit along the way were narrowed down and the campgrounds and hotels they’d be staying at were booked.

With every location plotted out, it was time for Deb to book her airfare. She skipped the aggregate sites like Kayak and Expedia and went straight to Delta to book her tickets. “I always book directly through the airline,” Deb says, “because if they change or cancel, it’s just easier to work with the airline's customer service directly.”

Deb booked her family’s airfare using nothing but miles, aside from a measly $45 in fees. The miles came from welcome offers she and her husband received after opening two new credit cards. At the time, Deb opened the Delta SkyMiles® Platinum Business American Express Card and received 70,000 bonus miles after completing the necessary minimum spend. Her husband opened the Delta SkyMiles® Gold American Express Card around the same time and received 50,000 miles. 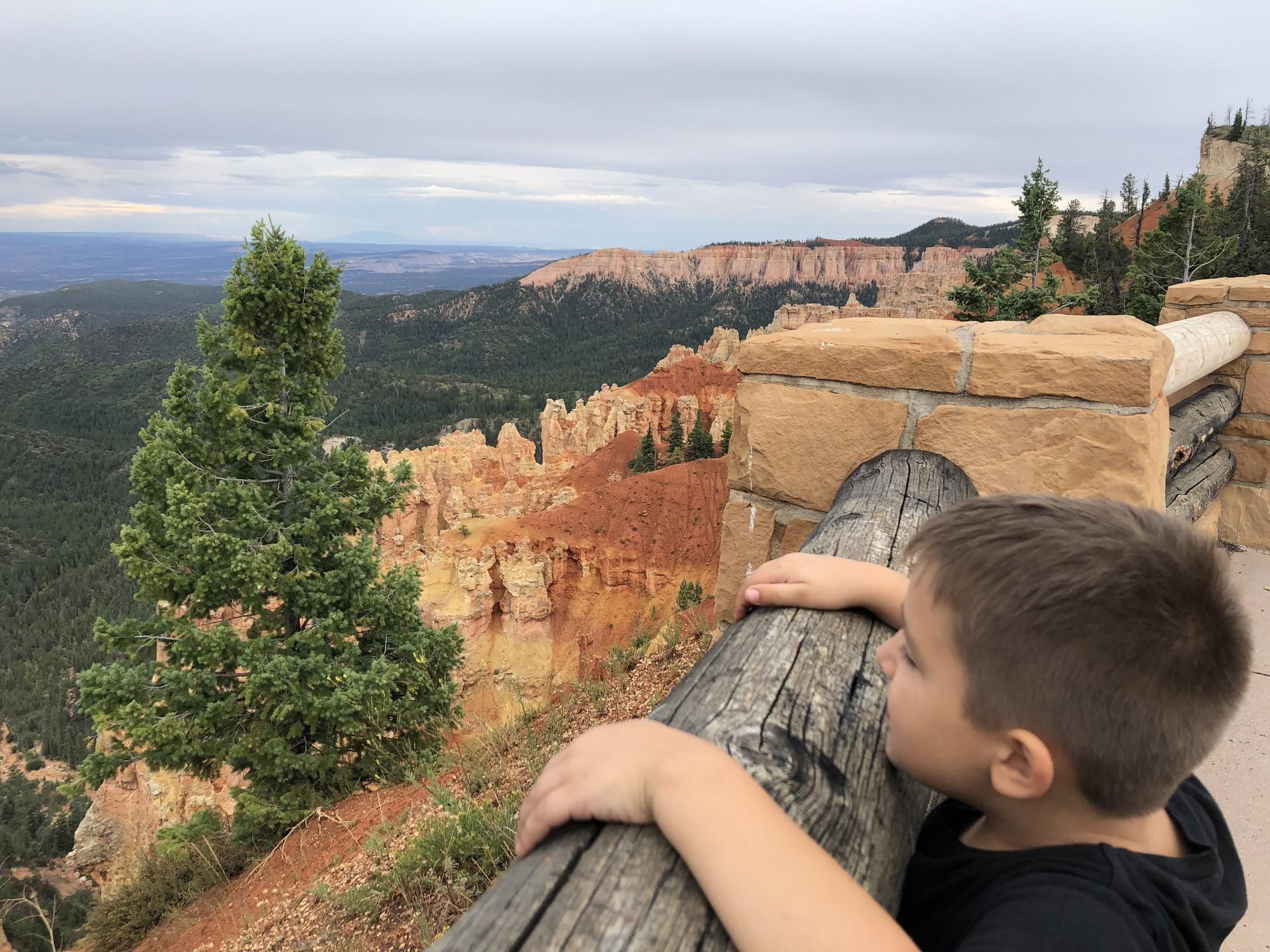 Because she wanted to fly into Las Vegas, pick up a rental car there, and then fly back from Phoenix where they would be returning the car at the end of the trip, Deb booked two one-way flights instead of roundtrip airfare. Her home airport in Syracuse is a small one, so cheap flights were hard to come by. The total came out to $679 per person for a grand total of $2,716 for her family of four. To pay for it, she cashed in 120K miles and paid the $45 in fees out of pocket.

As a Platinum Delta SkyMiles cardholder, Deb and her family were each able to check one bag for free. Normally, a free checked bag perk would go unused, as Deb never checks bags — choosing instead to pack light and carry on any luggage she needs. But since the family would be camping out of a car for nearly three weeks, being able to check four bags for free was a godsend.

Deb filled those four bags with every piece of camping equipment they would need — 200 pounds worth to be exact. From folding chairs, tents, and air mattresses to sleeping bags and even a portable stove, everything her family needed for a successful camping trip was tucked inside four free checked bags.

On their National Park adventure, Deb and her family spent three weeks traveling throughout the Southwest, alternating between camping and staying at hotels. To keep everyone feeling rejuvenated, they would spend two days camping, then two days at a hotel, two days camping, and so on and so forth.

This way, the family wasn’t stuck using campground facilities the entire trip, not to mention that it was a bit more refreshing to sleep in a bed every once in a while. To secure the best campgrounds and best campsites within those campgrounds, Deb booked her reservations six months in advance, paying $20 per night for a total of $160. 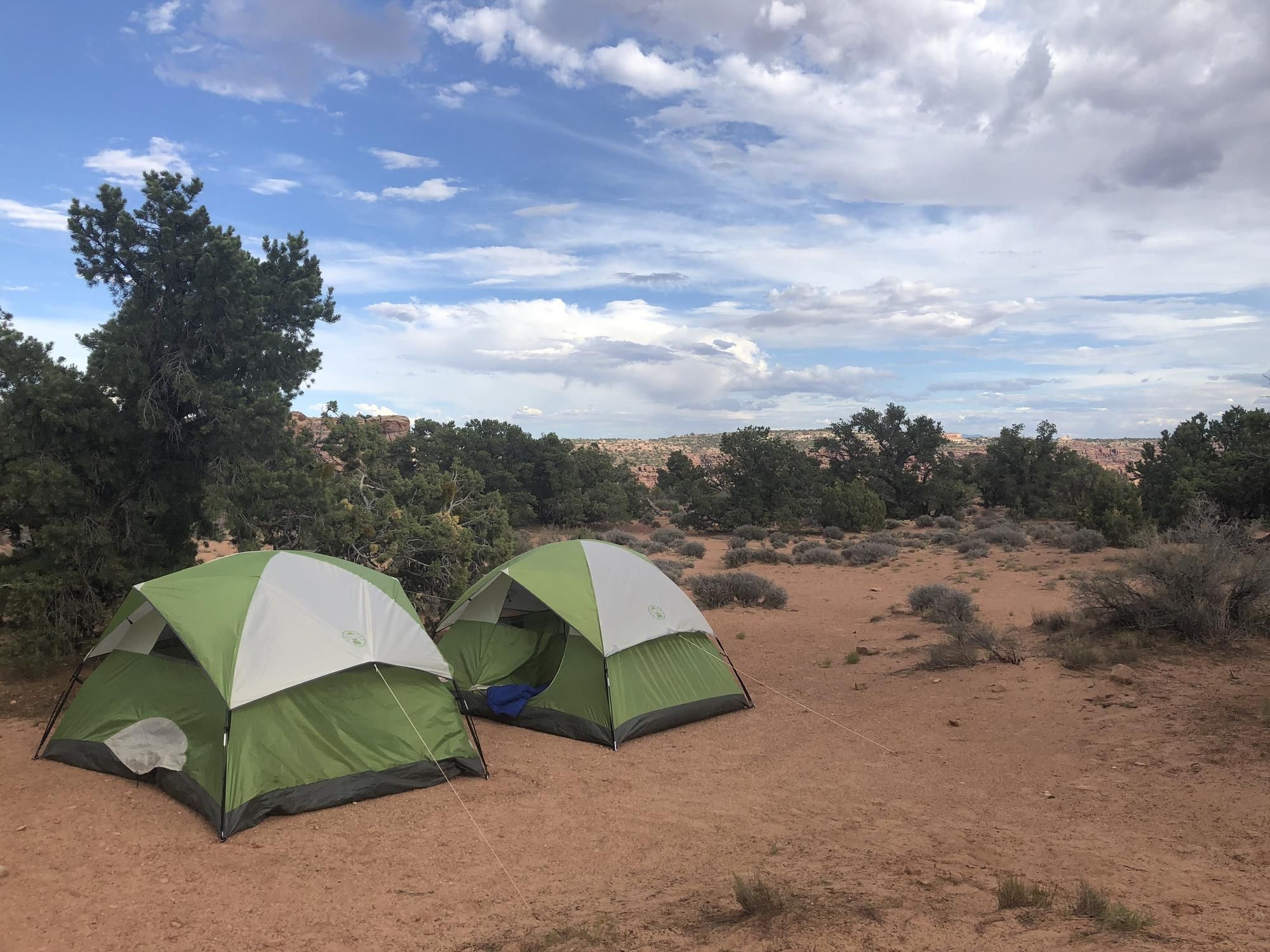 Not all the hotels they stayed at were booked on points, and that’s how they wanted it. “If there’s a particular hotel that I want to stay at and I can’t do it on points, I’ll spend the money,” Deb says. “I always look at my trips as like, we’re saving a significant amount of money, so I don’t need to do the entire thing on points. So, half of them [hotels] were on points, and half were out of pocket.”

Deb’s road trip began in Las Vegas, Nevada. Since they flew in, the family had to grab a car once they landed. However, they skipped the rentals at the airport and headed to an Enterprise Rent-A-Car just a quick Uber ride away.

Deb went to this particular car rental location because of the deal she got on AutoSlash. With AutoSlash, you enter the dates and type of vehicle you want and it searches all the car rental companies in a given area to find the least expensive option. Not only that, it will continue to monitor inventory for lower rates from the time you make the reservation until you pick up your car.

If AutoSlash finds a better price, you’ll be notified and you can choose whether or not to update your reservation. Since you don’t pay until you pick up your car, there’s no reason not to get the best price available. 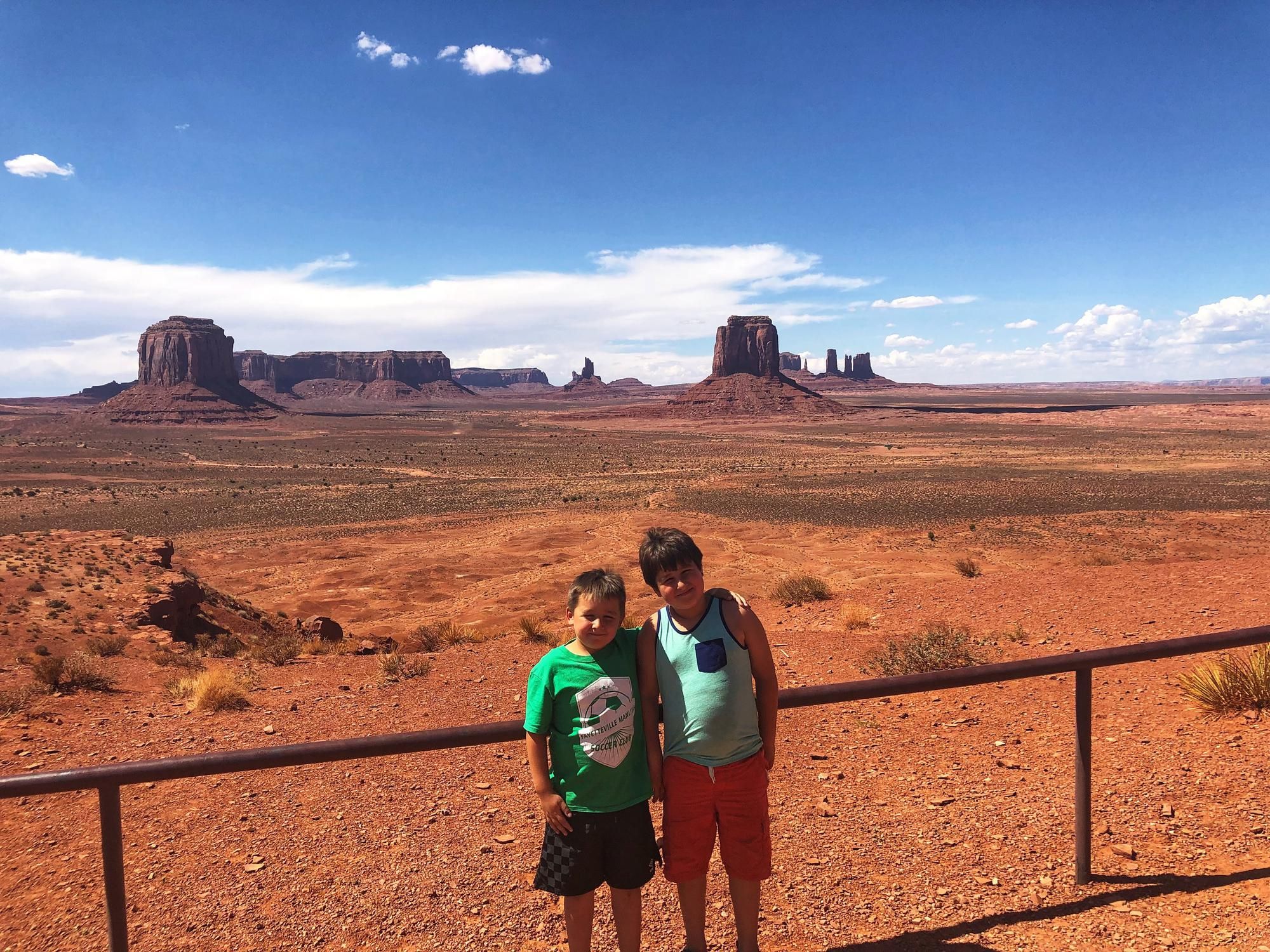 The car rental went on Deb’s Chase Sapphire Reserve® because of the card’s auto rental collision damage waiver. It was also more affordable to pay using a credit card instead of using points because of the deal she got using AutoSlash.

Deb knew she wanted a mid-size SUV because they were going to be in the car for three weeks, plus they were lugging around 200 pounds of camping gear. As it turned out, she managed to get an upgrade to an Audi Q7 for an additional $25 per week after successfully talking the rep down from his original offer of $50 per week for the upgrade.

The best part? According to her receipt, Enterprise never even charged her for the upgrade. In the end, her family got the Audi for $44/day, all inclusive. But, since they would be dropping the car off in a different city, there was an additional $120 fee.

*Food cost estimated based off Deb’s records and itinerary.

Deb used the bonus miles she received from opening the Delta SkyMiles Platinum Business American Express Card to cover the majority of her airfare.

Cardmembers also get their first checked bag for free when flying Delta, as well as Main Cabin 1 priority boarding so you can have a little more time to settle into your seat.

To cover the rest of the miles needed for their flights, Deb’s husband opened the Delta SkyMiles Gold American Express Card. He received 50,000 miles at the time — the current offer is 40,000 bonus miles, which is still a great offer. His bonus miles along with Deb’s miles more than covered what they needed to book their airfare.

With this card, you’ll pay an annual fee of $99 (waived first year), and you’ll receive a welcome offer of 40,000 bonus miles after you spend $2,000 on purchases in the first 6 months. This card offers 2X miles on qualifying Delta purchases, at restaurants worldwide, plus takeout and delivery in the U.S., and at U.S supermarkets; and 1 mile per $1 spent on all other eligible purchases, and your first checked bag is always free.

The Platinum Card® from American Express

The Platinum Card from American Express came in handy for accessing an airport lounge that was a part of the American Express Global Lounge Collection, as well as a $15 Uber credit. Deb also took advantage of free breakfast up to $60 and a $100 food credit using the Fine Hotel and Resorts program during her stay at the Delano in Las Vegas. Select benefits require enrollment.

As a new cardmember, you can get a lot of value from the Amex Platinum. Earn 80,000 Membership Rewards points after spending $6,000 in the first 6 months, as well as a slew of other valuable travel benefits, such as lounge access and a Global Entry or TSA PreCheck fee credit. Select benefits require enrollment. 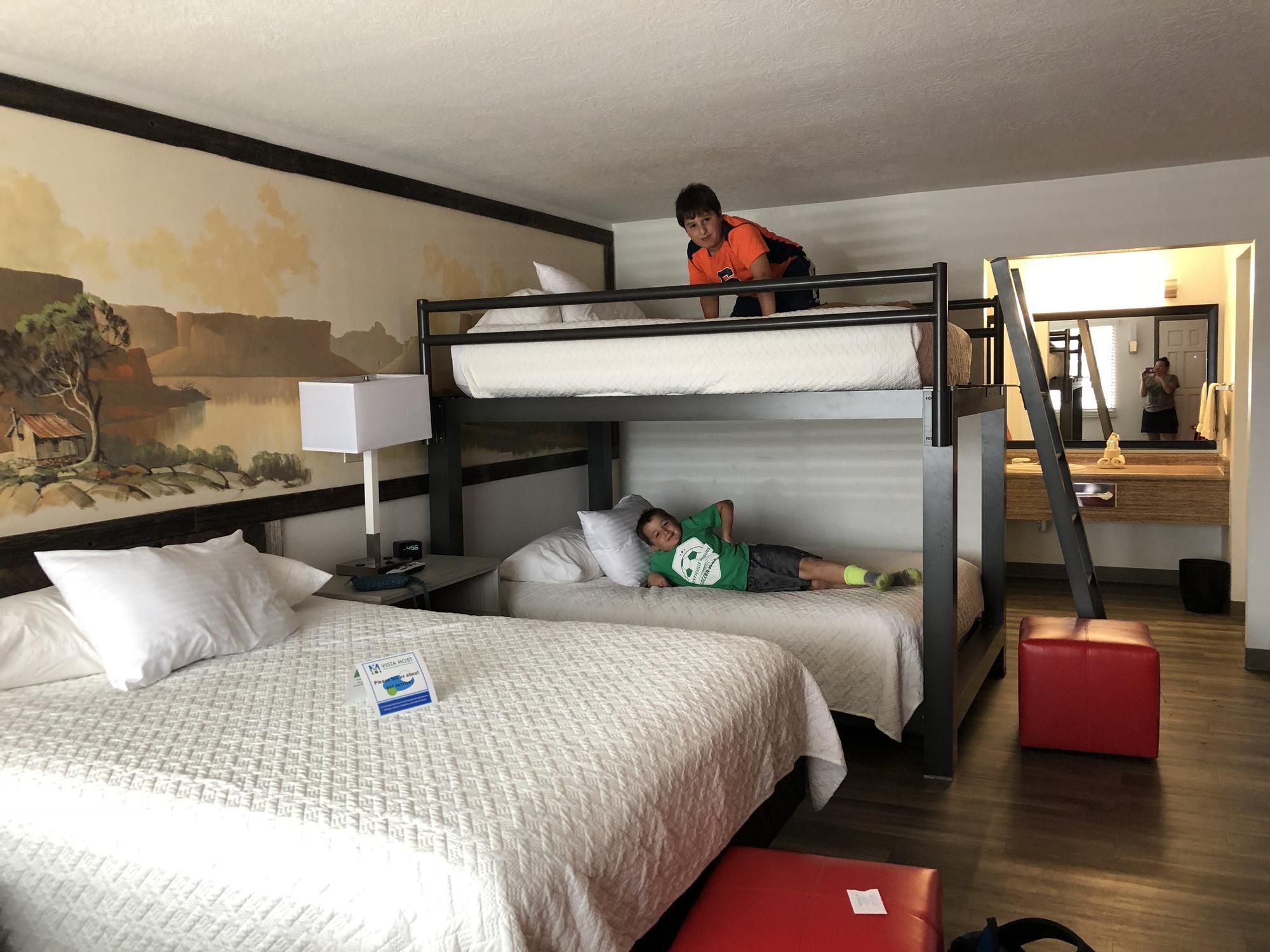 The Chase Sapphire Reserve was Deb’s go-to card for any regular spending during her trip, as it offers 10X points on Lyft rides and Chase Dining purchases; 10X points on hotels and cars booked via Ultimate Rewards and 5X points on flights booked via Ultimate Rewards (after the first $300 is spent on travel purchases annually); 3X points on travel and dining; and 1X points on everything else. She used it to cover meals, the hotels she didn’t book with points, and for the rental car, all of which fell under the 3X categories.

Right now, you can earn 60,000 points after spending $4,000 on purchases in the first 3 months from account opening. While there is an annual fee of $550, you get a $300 travel credit each year, as well as a fee credit for TSA PreCheck or Global Entry and access to Priority Pass lounges. So, if you have any plans to travel, this is one of the best travel credit cards that easily pays for itself.

When you sign up as a new applicant for this card, you can get this welcome offer: Earn 150,000 Hilton Honors Bonus Points after spending $4,000 in the first 3 months. This card comes with a $450 annual fee, but you can earn 14X points on eligible purchases within the Hilton portfolio, 7X points on qualifying travel purchases made directly with airlines/select car rental companies or Amextravel.com, 7X points at U.S. restaurants, and 3X points on all other eligible purchases. You also receive one Free Night Reward, which should help offset this cost.

While a decent amount of planning went into Deb’s family National Park road trip, it was beyond worth it. From credit card welcome bonuses that paid for airfare to a lesser known initiative that got the family free access to 11 parks and monuments, Deb and her family were able to enjoy a three-week adventure without breaking the bank. In fact, Deb saved her family over $4,000!

You may not be able to follow Deb’s trip exactly, but you can use her insight to help shape your own successful family trip. Affordable trips are accessible to everyone. A little planning, strategizing, and thinking outside the box can go a long way toward getting you out the door and on the trip you and your family have been dreaming of. If you're still unsure where to start, you can start by reading our Ultimate Guide to Travel Rewards.