Dollar Flight Club might not be a household name yet, but it’s a popular tool used every day by many in the travel community. Since even FinanceBuzz’s own rewards travel expert, Brandon Neth, considers it a favorite tool, we figured sharing a little bit about what exactly Dollar Flight Club is and how it can help you save money on your next trip made sense.

Let me start by asking you this: When you think about traveling to other countries, how long does it take for you to begin talking yourself out of the idea because of how expensive the trips might be? The cost of travel can easily hold anybody back from seeing the world. Sure, deals exist, but who’s got time to spend scouring the internet to find them? Dollar Flight Club does.

What is Dollar Flight Club?

Dollar Flight Club is a flight-deal-alert subscription service that helps people save money on airfare. How? By searching the internet for flight data to find deals that are 60% to 90% below the average round-trip price. After Dollar Flight Club discovers one of these bargains, it sends subscribers an email or text so they can hop on the bargain.

Started back in 2015 by Jesse Neugarten, Dollar Flight Club was conceived after a life-changing experience with a 7.8-magnitude earthquake while traveling in Nepal. Following the earthquake and with a newfound motivation to see more of the world, Neugarten dove headfirst into travel hacking. His first trip was a round-trip flight from New York City to Stockholm, Sweden for only $210.

Friends and family were quick to notice the types of deals Jesse was finding and began asking him to help them enjoy similar inexpensive vacations of their own. Thus, Dollar Flight Club was born.

How does Dollar Flight Club work?

Dollar Flight Club offers travelers both a free and paid subscription, with paid members getting first dibs on any deals that are found. While you can get deals with the basic membership, you’ll only receive 25% of the best ones departing from your home airport. For $69 per year, premium subscribers get four times more of the best international flight deals, weekend flight deals in the U.S., the ability to set multiple departure airports, and more.

Here’s a breakdown of the perks you get for an annual subscription of just $69 per year:

Once you choose your plan, simply pick your departure airport and wait for the deals to start rolling in. That’s it.

But don’t let the simplicity of this service fool you. Dollar Flight Club does all the hard work of finding you the best deals so you can focus on enjoying the adventure. To give you a taste of the enormous value Dollar Flight Club provides, you can test the water with a 14-day free trial of its premium service.

Once you sign up for Dollar Flight Club, you’ll end up on the flight deals page. Here, you’ll find the deals currently available, as well as past ones that have already been snatched up. You’ll also find a section for international deals and domestic getaways. 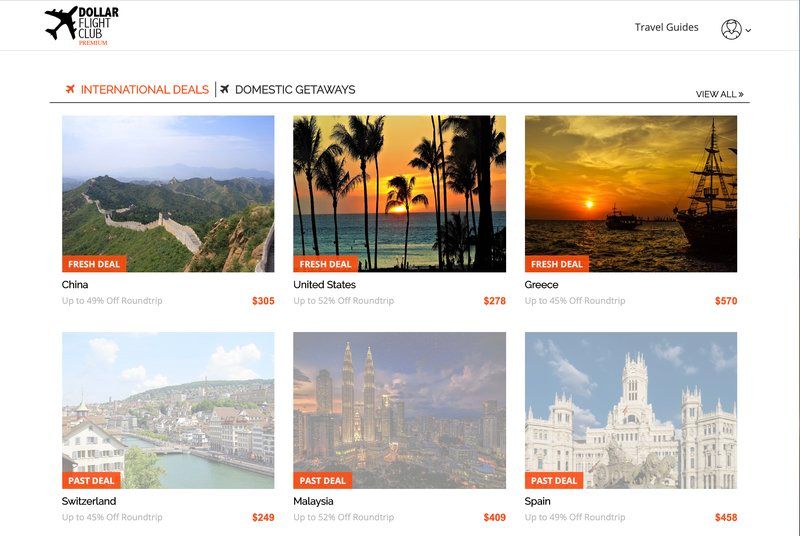 After you’ve settled on a deal that’s too good to pass up, go ahead and select it. You’ll be shown more details — price, how much you’re saving, travel dates, and departures from other cities — and you can decide whether to book or pass on it. 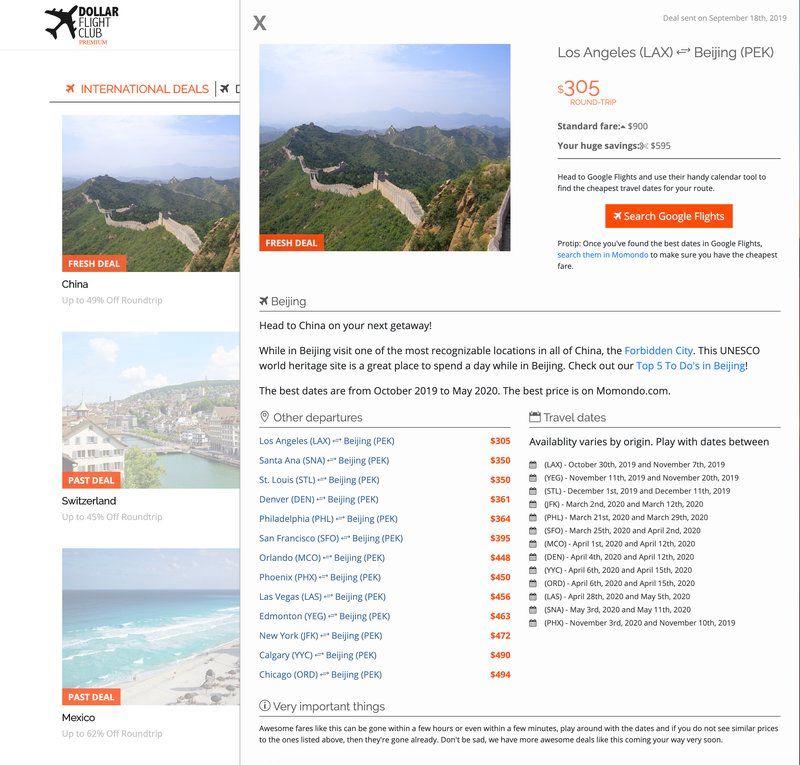 If you want the deal, you won’t book directly with Dollar Flight Club. With a click of the mouse, you’ll be taken straight to Google Flights to continue the purchase.

You can enhance your rewards if happen to have one of the best travel credit cards in your wallet. If you want to save the most, head over to your travel rewards credit card’s portal and try to replicate the deal. If you can find the same flight and price through the travel portal, you’ll not only get the deal Dollar Flight Club alerted you to, but you’ll now also have the ability to book it with your points.

If you’re ready to sign up Dollar Flight Club, you can do so either online or through the Dollar Flight Club app. All you need to do is provide your email address and choose your home airport — and voila, you’re done. If you go with the premium subscription, you’ll need to enter your credit card information as well (but remember that you’ll also get a free trial period to test out the service).

Once you’re signed up, there’s nothing more for you to do. Dollar Flight Club takes over, finds you the best deals, and sends them your way.

Is Dollar Flight Club worth it?

Ask our travel rewards expert Brandon Neth, and he’ll be the first to tell you how valuable Dollar Flight Club is. Once he saw the potential of the service back when it launched in 2015, he immediately signed up. Brandon has since used Dollar Flight Club on four different trips. His most recent deal? Philadelphia to Barcelona, Spain for only $380. And better yet, he was able to book the flight with points through the Chase portal.

We asked Brandon if he had any issues with Dollar Flight Club that would be worth mentioning. He did not. The only thing to point out, Brandon explained, was that the deals are often so good that they don’t last very long.

To not miss the best deals, consider this: The Department of Transportation requires airlines to hold reservations for 24 hours after the reservation is made. In other words, you have 24 hours after booking a flight to cancel for a refund. So, grab a deal when you see one so you don’t miss out. Then decide whether you want to keep it within 24 hours.

Even if you're someone who travels twice a year, with one deal alone you’ll have more than paid for the annual fee for Dollar Flight Club’s premium subscription. With an average savings of $500 per ticket, anyone can benefit from this service.

up to 5X points